Grammar Series: All About Punctuation 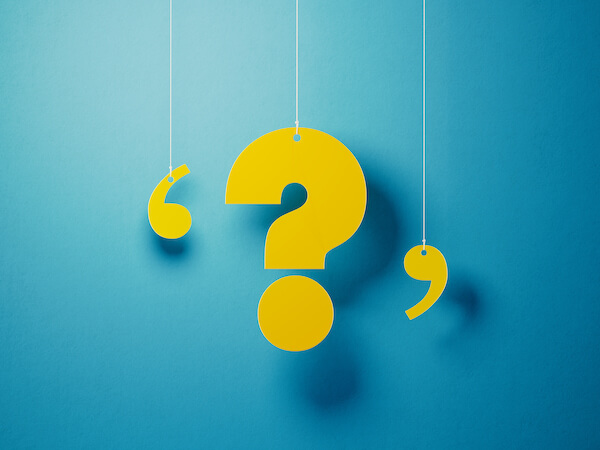 Everyone knows when to use a period, but what about those punctuation marks scattered throughout your manuscript? Understanding their use might be the difference between a well-crafted book and a poorly written one. Punctuation doesn’t have to be painful if you know the difference and when to use it. When used correctly, it can elevate your writing.

Let’s take a trip back to grammar school, shall we? These basics might seem elementary, but they’re oh-so-important, and it never hurts to brush up on your grammar skills. Here, we’ll break down the most commonly used punctuation and when and how to use each.

Commas separate clauses, such as two independent clauses or an introductory one. You’ll find them often before a conjunction like “and,” “but, “yet,” and “or.” Not sure when to use it? If the two clauses could stand alone as separate sentences, you can combine them with a comma.

Example: She drove to the store, and then she went inside.

(No comma: She drove to the store but it was closed.)

Likewise, use them between items in a series or list.

Example: She went to Target, Macy’s, and Home Depot.

The Oxford Comma, also known as a serial comma, is the comma that comes before the last item in a list. Highly debated as to the necessity of this punctuation mark and can vary between languages (such as British English and American English), but technically, there’s no right or wrong way. It depends on style preferences. When in doubt, ask your editor. Here are two examples:

He visited France, Italy, and Germany. (with serial comma)

He visited France, Italy and Germany. (without serial comma)

Oh, the notorious semi-colon. This often misused, misunderstood punctuation mark causes writers many a headache. Often used to replace the word “and,” it combines two closely related thoughts. Perhaps a more concise way to eliminate the need for an extra word when you don’t want to separate into two sentences. Another common use is to separate detailed lists where a comma would be confusing. It also can precede words like “however” and “therefore,” as in the examples below.

Example: He loved golf; however, he wasn’t very skilled.

Example: Let’s go to the store; I need to buy milk.

Unlike some punctuation that can serve various purposes, colons are mainly dedicated to offsetting lists, bullets, or a series of items.

Example: At the store, we need to get the following:
Milk
Bread
Eggs

It also can be used to summarize a sentence. In these instances, the word after the colon is typically capitalized.

Example: She felt two things when she entered the room: Cold and nervous.

Let’s clarify one thing: Not all dashes are created equal. (See what we did with the colon there?) Hyphens are the smallest of dashes and used for two primary purposes. First, use a hyphen to add a prefix to a word, such as ex-husband and re-enter. Next, use a hyphen to make a compound word like high-rise and mother-in-law. Here are two more examples.

Example: The two women were co-authors of the book.

Example: The children rode the merry-go-round at the park.

En dashes show ranges, such as page numbers, dates, and times. However, en dashes are often replaced with a simple hyphen.

On the other hand, em dashes show pauses or breaks in the sentence, much like commas. They help offset a side thought, as in the example below. Their use is very much a stylistic preference; some writers prefer them to commas or vice versa.

Example: Starchy vegetables—such as potatoes and corn—are high in antioxidants.

You can also use an Em dash to cut off a sentence or dialogue.

These curved brackets represent an explanation or afterthought as part of the sentence. They’re often interchangeable with em dashes. Use them to enclose supplemental information, such as comments and digressions.

Example: The students (and their teacher) went on a field trip.

Example: Using proper punctuation is hard. (But don’t say that to your editor.)

Notice how the entire sentence, including the period, is inside the parentheses.

Quotation marks indicate the spoken word or something that is a direct quote. They’re used in pairs, meaning that if you start a quote, don’t forget to close it at the end. In most cases, quotation marks always go outside the punctuation.

When quoting within a quote, use single quotation marks. For example, if the internal quote comes at the end of the sentence, you will end up with single and double quotation marks side-by-side.

Example: Mary said, “My teacher said I’m one of her ‘favorite students.’”

Finally, use quotation marks when mentioning shorter works, such as essays, short stories, and poems.

Example: My favorite short story is “The Lottery” by Shirley Jackson.

Apostrophes indicate possession. Who’s car is that? It’s Bob’s car. (The car belongs to Bob.) When the subject is plural, the apostrophe goes after the “s.”

Use apostrophes to create contractions. For instance, “can’t” instead of “cannot.” Contractions help make your writing more concise and improve the overall flow.

Brushing up on grammar basics is a quick and easy way to be sure your writing is up to par. Whether you’re a newbie or a seasoned writer, there’s never a wrong time to review proper punctuation. So keep this guide on hand or bookmark it as a go-to reference for your next writing session, then come back for more grammar guides as we strive to make your work shine.